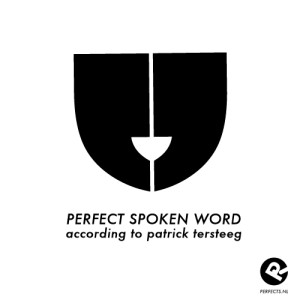 According to wikipedia spoken word is a performance art that is word-based. It often includes collaboration and experimentation with other art forms such as music, theater, and dance. However, spoken word usually tends to focus on the words themselves, the dynamics of tone, gestures, facial expressions, and not so much on the other art forms. In entertainment, spoken-word performances generally consist of storytelling or poetry.


The idea for this Perfect came to me when I noticed how many Spoken Word tracks there are in my list of All Time Favourites. Four of them are in my All Time Top Ten; My Sister at No 4, The Gift at 5, Scenes In The City at No 7 and A Dream at No 10. Within an hour I already found about fifteen tracks and even more coming up in the days and weeks after. Then I decided to leaf through my personal record collection and found even more.

Every time I wanted to add a track I tried to make a definition – my definition – of Spoken Word (I never looked it up on Wikipedia until the list was nearly finished) to figure out if the track fitted this ever growing Perfect. Obviously the Words shouldn’t be sung and the track had to include music. But this would mean I had to leave out America – Allen Ginsberg because it doesn’t contain music and Writing For The Second Time Through Finnegans Wake, Part Four – John Cage because it is (more or less) sung. I wondered if artists are allowed to appear more than once, but never even considered choosing between the tracks by Lou Reed and/or John Cale. Although some tracks are funny in one way or another I did not include comedians, but Vivian Stanshall and Peter Sellers I couldn’t leave out. Although Spoken Word is obviously poetic, I didn’t want to include (too many) poets reciting their own work, but it would be absurd to leave out Ginsberg or Kerouac! And – apart from Yoko On
o – why are there no women in the list? I simply couldn’t figure it out.

Finally I decided to make a list based on purely personal choices, personal taste and gut feeling. Does this track add something to the list, do I like listening to it (more than once) and (where) does it fit in the tracklisting (Please don’t shuffle play it, I’ve been sequencing this for hours!). I must say I’m rather pleased with the result, a wildly ecclectic, weird, dreamlike compilation, most of which sends shivers down my spine every time I listen to it. I can’t expect you to feel the same, but I hope you enjoy Perfect Spoken Word (preferably at night, by the fireside, a checkered blanket on your knees, with wine or whiskey at hand).