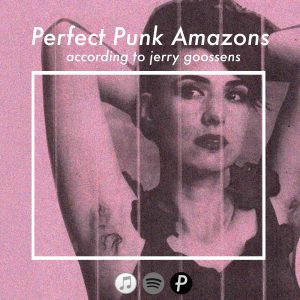 So, suddenly the righteous anger of the Linda Lindas was everywhere. Three power chords and the fucking truth was all it took to launch four Californian school girls from viral stardom to the Jimmy Kimmel Show and a contract with Epitaph records. Sure, Racist, Sexist Boy made me smile. But it also made me somewhat envious. Oh, to be young again and to have the vulcanic power of punk at your disposal to vent your frustration and rage in the most joyous way possible!

One of the greatest feats of the punk movement, is that it gave girls and women a voice to express themselves like never before. Sure, we had the founding mothers, like Sister Rosetta Tharpe, the Girls in the Garage and young Suzie Quatro begging us to come on over to her side. But it was X-Ray Spex’s Poly Styrene, Siouxsie Sioux and the mighty Slits who booted down the door of the rock patriarchy and made their voices heard. Growing up in the late seventies and early eighties I was lucky enough have these fearless amazons mould my world view. Yes, Debbie Harry was (is!) a bomb shell, but not one to be fucked with. The presence of Patti Smith was absolutely intimidating. And the first time I saw Utrechts’ own The Nixe play a shambolic gig at some school dance in 1980 I was awestruck by the absolute fierceness of these young women. Raw fucking girl power.

So yeah, here I am: a middle aged white man -the enemy!- appropriating all these female voices. There’s the brutal hardcore of Naked Aggression and the yobbish UK ’82 wallop of Vice Squad. There’s the voice of Bikini Kill’s Kathleen Hanna that directed Kurt Cobain’s Teen Spirit, and the commanding, prophetic wail of Polly Harvey. But also the saccharine distorted fizz of Wales’ own Darling Buds or the bittersweet reggae of Holly Cook -punk royalty!- lamenting the late great Ari Up. There’s the trans-voice of NYs warrior queen Jayne County and the just hatched voice of baby Björk in K.U.K.L. There’s even some voices you might not consider punk at all. But fuck you, they all mean it maaan. Isn’t punk about making your own rules? It was punk that liberated these voices, and they continue to liberate women and men to this day.

Oh bondage (pants), up yours!