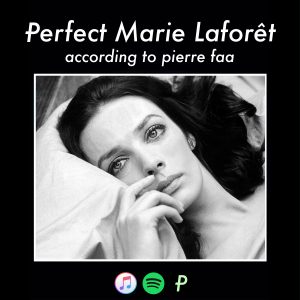 
In the French pops landscape of the 60s, Marie Laforêt’s discography is a perfect counterpoint to Françoise Hardy. While Françoise was always considering how difficult it is to love and be loved in return, Marie chose to explore a way more diverse territory, like a constantly moving kaleidoscope of stories, moods, rhythms and sounds. It may have ups and downs, and some not-so-interesting lyrics (as she admitted herself). Maybe it’s more difficult to embrace it as a whole thing. Everyone will pick different songs, like this one, and dislike this one… Marie never tried to become a monument, so you’re left there with your own choices and freedom. But in the end, it turns out as a fantastic quilt of influences, showcasing a curious mind, an incredibly versatile singer, and a flair for interesting covers (Joni Mitchell, Lee Hazlewood, The Rolling Stones, Bob Dylan, Margo Guryan…)

Marie often used her acting talents, playing dramatic or funny characters in storytelling songs that were conceived like short movies (“Viens, viens”, “Ivan, Boris et moi”). She also explored folk and world music since the early 60s, long before it became a trend. It actually was her personal priority, that she always tried to push, between two commercial hits to please her label.
Most of her 60s hits were beautifully arranged (and often composed) by André Popp, whose playfulness with sounds still resonates today. For that special drum sound in “Manchester et Liverpool”, for instance, he hit two petanque balls and used a big reverb. By chance, that song became famous in Russia, as it was used for many years as the weather forecast theme on national tv.

In the late 60s, Marie became her own producer and tried to impose her taste in world music. Which worked quite well on stage, but not so much on record. Surfing on the international success of her previous recordings, she did extensive tours with Los Incas as a backing band. During a trip to Brazil, she met a young beginner named Egberto Gismonti, and took him back with her to France. Their unfinished 1970 album (turned down by CBS) was finally mixed and released this year (“Lirica n°1”). Their innovative musings came too early for the mainstream French audience. Egberto went back to Rio and did a brilliant career on ECM Records, hailed as a genius of Brazilian jazz music.

After the bitter end of that collaboration (that probably inspired the song “Maine Montparnasse”), Marie kind of resigned from her musical explorations. As the single mother of two kids (soon to be three), she chose to come back to commercial songs, in order to make a living and give her children a more stable life. She then scored some of her biggest hits (“Viens, viens”, “Cadeau”, “Il a neigé sur Yesterday”), but these 70s albums miss the freshness of her early days, and the production didn’t age as well. Her A&R people at that time clearly missed a train, by not connecting her with the new generation of songwriters like Souchon, Sheller, Berger, Yves Simon, etc. And Marie herself was not in the mood to run after a new sound. She probably felt she wouldn’t fit in that game, and finally retired in Geneva, where she ran an art gallery then focused on writing books. A last album was published in 1993, as a goodbye to her fans. As an actress, she went on appearing in movies (some popular comedies with Belmondo, some arty stuff like Enki Bilal’s “Tykho Moon”). Her most acclaimed performance was the part of Maria Callas in “Master Class” (1999, 2008).

Against all odds, Marie finally accepted to come back on stage in 2005, pushed there by her tv host friend Laurent Ruquier. Despite arguable orchestrations, the series of shows quickly sold out, and an enthusiastic crowd moved Marie to tears every night. Then, after years of emails and conversations, a fan named Yohann Masson convinced her to work on the release of a complete recording with Universal. Marie finally said yes. She oversaw the artwork and wrote a very smart, moving and funny text to go with the boxset. That was her last project before she passed away on Nov. 2nd, 2019.