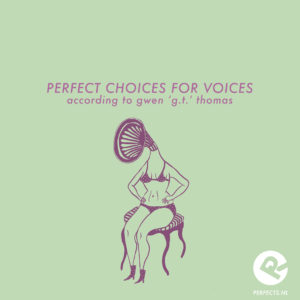 
Angel – Laura Mvula
Spontaneous poly-chords scatter you into tiny pieces! Laura Mvula makes a wish as she blows you away, like the fuzzy dandelion seed you suddenly realize you are. The lady just blessed you. This is what amazing vocal arranging can do.

1-3-5-8 and Jane – Spanky and our Gang
The song “Jane” comes with the prelude “1-3-5-8,” which works itself into the main piece. May not be your cup of tea at the start, but I include it as a neat intro to singing the degrees of the scale – as handy as “doe a deer” but, like, 80 million times less annoying. My favourite part in “Jane” is when female vocalist Spanky puts a certain je ne sais quoi into her “la la”s … it’s a shamelessness that most vocalists from the past 20 years haven’t come near with a ten foot pole, but which deeply resonates with me as a singer, listener, and arranger myself. More of this, please!

Red Lights – Chloe x Halle
Oh, look! Someone heard my plea and sent me Chloe and Halle, 18 and 16 year-old sisters who come up with unfettered and crazy-beautiful vocal arrangements in their unconventional songs. They’re my hope for the future of pop music, at the mo’.

You Can’t Go – Split Level
For those with a lower threshold for the “vocal groupy” stuff on this list (and, yeah, there’s definitely gonna be a few more of those before we’re through), here’s a song that just plain rocks. A catchy melody sung perfect 4ths apart from itself, which branches out into more complicated 4 part harmony from there. It satisfies.

Yesterday the Dog – Inner Dialogue
This one reveals that singing open harmonies perfectly in pitch can be quite tricky. Thankfully, there IS such a thing as charming degree of out-of-tuneness, and these gals have pretty well cornered that market.

You Be You And I’ll Be Me – The Free Design
I hate to let a compilation go by without inclusion of a song from my dear friend and mentor, the late Chris Dedrick, and his sunshiney, vocally driven, baroque pop group The Free Design! Chris told me quite some stories about the recording process from his Free Design days, and –while I can’t speak to how this specific song went down in the studio– I can tell you FOR SURE that this was recorded in the day when you needed to have the skill to nail it in one go. No time for lots of multi-tracking and do-overs. With that in mind, take note of the absurd precision in their performance of these parts. And ya gotta love the magic of familial vocal chords ringing in chorus with each other, making it all the easier to pull of a pretty trademark Free Design effect: seamlessly weaving the melody from one voice (and vocal range) into another.

Box of Things – Lori Cullen
Here, some 35 years after The Free Design, you can hear Chris Dedrick’s unique vocal (and brass) arranging in support of a brilliant singer and songwriter named Lori Cullen. The blend of the voice with the horns is too thoughtful for words.

F Q-C # 7 – Willow
Just 14 years old when she wrote and produced this track, Willow won’t be held back by convention or trends. As a result, she’s creating something completely original and it’s stunning. Ways she decides to vocally accompany her own very intense melody:
– Pure tone, high tight harmonies performed silkily/ gently (in stark comparison with her gruffer lead line)
– Falling glissandos
– Huhs, hollers and whoops
– Talk-singing in time with the sing-singing part
… And I’m probably missing a few, because really this song is a kitchen sink of cool vocal effect choices. Hope she’s making more like this for us soon.

Flying Fish – Asha Puthli
On this song, Asha Puthli combines the vocal stylings of her culture of origin (Indian) with western ’70s disco/ funk. The backing vocals are basically your standard R&B “doot-doo”s, but I’ve included this song because it’s a great example of “not overdoing it.” Due to the soaring melodic stylings that Puthli goes for, really straight-forward but solid backing vocals (done ab-so-lute-ly right) is just what this song needs. The lesson here for budding vocal arrangers? Sometimes less is more. Especially when a song has its own unique flare in the lead vocal. Don’t let your other vocal parts detract from that. Complement, don’t compete.

Who’s Sorry Now? – Esquivel
Being a vocalist in an Esquivel project should be a dream gig for any vocalist worth his/her salt, IMHO. Esquivel treated the human voice as as much of an instrument as the rest of his big band, zipping it from one side of your stereo to the other during his adventures in panning (aka “music your eyes can follow”) back in the 1950s. But additionally, he had a knack for employing the percussiveness or essence of specific words and onomatopoeias into his vocal arrangements. Boink! Boink! Love it.

Poinciana – The Four Freshman
As President of the Poinciana Fan Club, I had to include this rendition of my favourite song, sung here in classic, Barbershop inspired four-part harmony by one of the greatest vocal groups of all time.

Maxine – Donald Fagen
A frequently cited reason people give (with the distinct gleam in the eye of someone working hard to hold down their lunch) for their contempt for the band Steely Dan: Donald Fagen’s voice. This song proves once and for all that these people were born with defective ears and that Fagen’s voice is an important gift to the planet we call Earth. The Four Freshman were undoubtedly an influence on this vocal arrangement, which Fagen (my musical hero, by the way) multi-tracked with a keen precision that leaves this listener covered in goosebumps. #sosmoothitmakesmebumpy

Old Cape Cod – Patti Page
Crazy enough, my introduction to this number was when Groove Armada sampled the intro in their 1997 track “At the River.” I’m so glad I found it – one way or another!

Sail on, Sailor – The Beach Boys
Look, I have nothing original to say about The Beach Boys, or their tendency to hit the ears like a mini-choir wrapped up in just one band’s worth of dudes. I’ll just say, if you were to listen to their song “In My Room” from 1963, you’d clearly hear the link to the Patti Pages and Four Freshmens that came before them. On this one, from 1973, you hear how that vocal sound evolved over time.

Sincere Sensation – Eric Matthews
Great example of how thoughtful vocal arranging lifts a song WAY up to the next level. He starts with simple octave doubling in the voice. Gets more exotic with some open 4ths and 5ths (later referred to in the organ solo: brilliant). But for me, it’s the dominant 7s that rear their heads that really get me. At one point, they’re distinctly missing from the rest of the instrumentation, but he’s got it covered in the vocals. So, if he hadn’t sung that note, this astounding colour would be completely missing from the song. Songwriters of the world: take a page from Eric Matthews and please lift your songs up to the next level through these kinds of choices for voices!

Little Island Song – Bauer
To give you a sense of how all these influences from various eras and styles have combined to impact my own work as a vocalist and arranger, here’s a song that I was heavily involved in on the brand new album “Eyes Fully Open,” from Dutch artist Bauer. (Can you spot the influences at work?)

I’m Not in Love – 10cc
You may have noticed a trend in this list: not so many artists after the year 2000 showing up. This song is no exception, but I’m wrapping up this playlist with some forward thinking, at the very least. 10cc were the first folks to really noticeably use the studio like an instrument. Part of that, in this song, is that they put vocals loops under faders in the production booth and “played” those vocal sounds with their fingertips. This song has the ability to reinvigorate my passion for vocal arranging in a really unique way because, on top of the clever production with the vocal loops, you’ve got the voices of the band members doing more conventional harmonies throughout. It’s a perfect marriage of “sampling the voice/ using it as an instrument” and “keeping it human.”

At the River – Groove Armada
So, in conclusion, in lieu of an obvious choice like The Carpenters or The Mamas and The Papas, whose amazing vocals have been oo’d and aw’d to death, I decided to leave you with this one. Maybe more fitting to think of it as a “bonus track.” As mentioned above, the duo Groove Armada managed an incorporation of Patti Page’s beautiful “Old Cape Cod” in this song. Getting awesome vocal variety back into today’s music doesn’t have to mean relying on the form, styles, or mindsets of decades past. So, I’m just throwing it out there: if you want some original Patti Page-style vocal tracks (or other soundalikes from before the autotune-era) to chop up and use in your own way, hit me up. I’ll make something just for you. I’m musician G.T. Thomas, based in Amsterdam, all around the web, and I’d be happy to make your acquaintance.