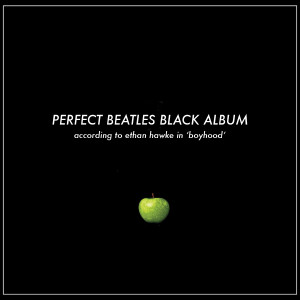 I wanted to give you something for your birthday that money couldn’t buy, something that only a father could give a son, like a family heirloom. This is the best I could do. Apologies in advance.

I present to you: THE BEATLES’ BLACK ALBUM.

The only work I’ve ever been a part of that I feel any sense of pride for involves something born in a spirit of collaboration — not my idea or his or her idea, but some unforeseeable magic that happens in creativity when energies collide.
This is the best of John, Paul, George, and Ringo’s solo work, post-BEATLES. Basically I’ve put the band back together for you. There’s this thing that happens when you listen to too much of the solo stuff separately — too much Lennon: suddenly there’s a little too much self-involvement in the room; too much Paul and it can become sentimental — let’s face it, borderline goofy; too much George: I mean, we all have our spiritual side but it’s only interesting for about six minutes, ya know? Ringo: He’s funny, irreverent, and cool, but he can’t sing — he had a bunch of hits in the ’70s (even more than Lennon) but you aren’t gonna go home and crank up a Ringo Starr album start to finish, you’re just not gonna do that. When you mix up their work, though, when you put them side by side and let them flow — they elevate each other, and you start to hear it: T H E B E A T L E S.

I guess it was the fact that Lennon was shot and killed at 40 (one of Lennon’s last fully composed songs was “Life Begins at 40,” which he wrote for Ringo — I couldn’t bring myself to include it on the mix as the irony still does not make me laugh) and that I just turned 40 myself that conjured this BLACK ALBUM. I listen to this music and for some reason (maybe the ongoing, metamorphosing pain of my divorce from your mother) I am filled with sadness that John & Paul’s friendship turned so bitter. I know, I know, I know, it has nothing to do with me, but damn it, tell me again why love can’t last. Why do we give in to pettiness? Why did they? Why do we so often see gifts as threats? Differences as shortcomings? Why can we not see that our friction could be used to polish one another?

I read a little anecdote about when John’s mother died:

He was an angry teenager — a switchblade in his pocket, a cigarette in his lips, sex on his mind. At a memorial service for his “unstable” and suddenly dead mom (whom he’d just recently been getting close to), he — pissed off and drunk — punched a bandmate in the face and stormed out of the memorial reception. Paul, several years his junior — a young boy, really, who didn’t yet care about girls, who was clearly UNCOOL, and who was let into the band despite his lack of badass-ness and sexual prowess due to the fact that even at 14 he could play the shit out of the guitar — chased John out onto the street saying, “John, why are you being such a jerk?”

John said, “My mum’s fuckin’ dead!”
Paul said, “You never even once asked me about my mum.”
“What about her?”
“…My mum’s dead too.”
They hugged in the middle of the suburban street. John apparently said, “Can we please start a fucking rock ‘n’ roll band?”

This story answered a question that had lingered in my brain my whole music-listening life: If The Beatles were only together 10 years and the members of the band were so young that entire time, how did they manage to write “Help,” “Fool on the Hill,” “Eleanor Rigby,” “Yesterday,” “A Day in the Life”? They were just 25-year-old boys with a gaggle of babes outside their hotel room door and as much champagne as a young lad could stand. How did they set their minds to such substantive artistic goals?

They did it because they were in pain. They knew that love does not last. They knew it as extremely young men.

With the BLACK ALBUM, we get to hear the boys write on adult life: marriage, fatherhood, sobriety, spiritual yearning, the emptiness of material success — “Starting Over,” “Maybe I’m Amazed,” “Beautiful Boy,” “The No No Song,” “God” — and still they are keenly aware of this fact: Love does not last.

I don’t want it to be true. I want Lennon/McCartney to write beautifully together forever, but is that really the point? I mean if the point of a rose was to last forever, it would be made of stone, right? So how do we handle this idea with grace and maturity? If you’re a romantic like me, it’s hard not to long for some indication of healing between the two of them. All signs point that way.

When Paul went on SNL recently, he played almost all LENNON. And he did it with obvious joy.

Can you listen to “Two of Us” (the last song they wrote side by side) and not hurt a little? What were those two motherless boys who hugged in the middle of the road so long ago thinking as they wrote “The two of us have memories longer then the road that stretches out ahead”?

The dynamic of their breakup, like any divorce, is mysterious. Some say that Paul, the pupil, had surpassed John, the mentor, and they couldn’t reach a new balance. Some say Paul was a little snot who bought the publishing rights out from underneath the other three. Others say without Brian Epstein there was no mediator between their egos. Who knows.

I played Samantha “Hey Jude” the other day, and of course she listened to it over and over. I told her the song had been written by McCartney for Lennon’s son after Lennon’s divorce and she listened even more intently. George once said that “Hey Jude” was the beginning of the end for the Beatles. Brian Epstein had just died and John & Paul were left alone to run the brand-new Apple label. They recorded “Hey Jude” and “Revolution” as a single. Normally, Brian would decide which song was the A-side and which was the B-side, but now it was up to the boys. John thought “Revolution” was an important political rock song and that they needed to establish themselves as an adult band. Paul thought “Revolution” was brilliant but that The Beatles were primarily a pop band and so they should lead with “Hey Jude.” He knew it would be a monster hit and that the politics should come on a subversive B-side. They had a vote. “Hey Jude” won 3-1. George said that John felt Paul had pulled off a kind of coup d’etat. He wasn’t visibly upset but he began to withdraw. It was no longer his band.

The irony/punch line of this story is another story I once heard: When the “Hey Jude”/”Revolution” single was hot off the press, the boys had the mischievous idea of bringing their own new single to a Rolling Stones record-release listening party. Mick Jagger says that once the Fab Four arrived and let word of their new single slip — just as Side 1 of the Stones’ big new album was finishing — everyone clamored to hear it. Once The Beatles were on, they just kept flipping the single over and over. Side 2 of BEGGARS BANQUET never even found the needle.

So no matter how mad John was, he wasn’t that mad…

Once when John was asked whether he would ever play with Paul again, he answered: “It would always be about, ‘Play what?’ It’s about the music. We play well together — if he had an idea and needed me, I’d be interested.”

Maybe the lesson is: Love doesn’t last, but the music love creates just might.

Your mom and I couldn’t make love last, but you are the music, my man.

“And in the end, the love you take is equal to the love…”

I love you. Happy birthday.