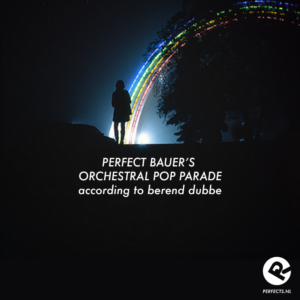 Berend Dubbe (Bauer) has been a fan of the orchestral pop genre for quite some time, his new album Eyes Fully Open on Basta Music is out on October 7, 2016. This a playlist with his biggest inspirations to get you in the right mood.


Wichita Lineman – Glen Campbell. I remember hearing this amazing Jimmy Webb song in the HEMA on Nieuwendijk in Amsterdam for the first time around 1985.
This is orchestral pop “light” at its most compelling, a perfect blend of drums/bass/guitar, strings and brass.

It’s Too Late – Andy Williams. A very groovy brass-laden track, very suave and 70’s. Andy Williams is a big one in the bachelor pad orch pop realm. His velvety voice charms both men and women.

Paris 1919 – John Cale. Not a classic orchestral pop track but definitely a very ’60’s-with-strings feel. The heavens that open at 2:22 is as far as John Cale ever got away from The Velvet Underground. I wonder what Van Dyke Parks would have done with the string arrangement.

Something In The Air – Thunderclap Newman. The slightly out of tune guitar at the start charms straight away. This is a very classic pop song. The downward moving bass line has become somewhat of a standby in itself.
Very Sgt. Pepper “A Day In The Life.”

MacArthur Park – Richard Harris. Before movie star Richard Harris became Albus Dumbledore in Harry Potter he was also Jimmy Webb’s “house singer.” “MacArthur Park” is the quintessential orchestral pop song. The insane lyrics, the drama, the bigness, it’s all very tasty and compelling and ultra cool (it is, believe me). In the midst of my record collection, for 10 years I’ve noticed a growing corner of just “MacArhur Park” covers.

Age Of The Understatement – The Last Shadow Puppets. Alex Turner (Arctic Monkeys), Miles Kane (The Rascals), James Ford and Zach Dawes did such a great job reviving the orch pop genre a couple of years ago.

Montague Terrace (in Blue) – Scott Walker From Scott (the first one). The drumroll at 1:10 should be inducted in the Smithsonian Museum.

We’ve Only Just Begun – The Carpenters. Choosing the best orchestral Carpenters song?? Are you kidding me?

Shadow of a Man – Bent van Looy. Best song produced in the lowlands in years. Yes, very orch pop. A rollercoaster in songwriting.

A Leaf Has Veins – The Free Design. Where Sunshine Pop meets Orchestral Pop. Genius stuff. I was lucky to work with Chris Dedrick in 2007 and carry that great time forever in my heart.

Lied van de Verdwenen Molens – G.T Thomas. Beautiful song from very talented US songwriter, producer, bass-player and Bauer collaborator. A fellow orch pop devotee. On this one, she sings in Dutch as part of a project of sonnets set to music. I sing on this, too.

Blissfully Up – Bauer. Bauer, that’s me. Great memories of this, such a great opportunity to work with one of the world’s most talented composers/conductors, Vince Mendoza. The orchestra is not too shabby, either.

Riding To Vanity Fair – Paul McCartney. Just when everybody questioned Paul McCartney’s relevance, he released this album. One of his most impressive vocal performances, beautifully recorded by Nigel Godrich of Radiohead fame.

Our Mutual Friend – The Divine Comedy. Very impressive storytelling. About a relationship in all its facets, going to the dogs. In Technicolor. Cool reference to the Walker Brothers’ (Scott Walker’s original band) “The Sun Ain’t Going To Shine Anymore” at 2:33.

Make Me Lovely – Laura Mvula. This album always makes me weep like a baby.