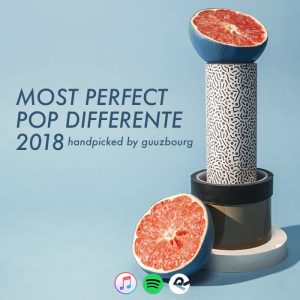 Sifting through mounds of music every week to select the bestest non-English tracks, that’s gotta lead to a year list. And here it is; Bestest Differente. To prove that you can sing in French, Italian, Japanese or Dutch AND connect to listeners who don’t understand that language. When it comes to non-English songs, I usually refer to Dutch folk singer André Hazes, who once said about fado-queen Amalia Rodrigues: I have no clue what she’s singing, but I feel her in my heart.

Which goes for a lot of tracks in this Bestest 50 list. A quick note on those: ‘though I listen to songs from all around the world, the tracks that strike me most are sung in Spanish, French, my own language Dutch, and Italian. This is because there are many strong, weekly updated playlists with Spanish, Italian and French tracks. Musically, they’re interesting too, especially music from Argentine, Chile and Mexico is either very progressive or, when it’s more retro, it’s so well done, it ticks all the right boxes.

I want to highlight a few songs. The best album I heard all year, is by Spanish nu-flamenco singer Rosalía. She marries tradition to fresh new sounds and production techniques (thanks to El Guincho), which led to an album I was blown away by.

Same goes for Mon Laferte, from Chile, though she’s a tad more traditional. Like Maria Rodès (from Spain), who adds a more indie vibe. In Colombia, it’s Black Mambo who are pushing various latin boundaries.

In France, Feu! Chatterton is taking Nouvelle Chanson to the next level. What an incredible album they made.
I was also very smitten by the neo perreo of Tomasa del Real, Chico Sonido and the like. It’s so hot, you need to shower after listening.

Ainé and Cosmo are just two examples of a wave of new Italian singers who make great songs, in a modern jacket. And from the Netherlands, please immerse yourself in the wonderful worlds of Eefje de Visser, Felbm and Jungle By Night.

To name but a few. All the 50 songs in the list made me very happy this year. Hope they do the same for you.